It never works out as well as you'd have hoped 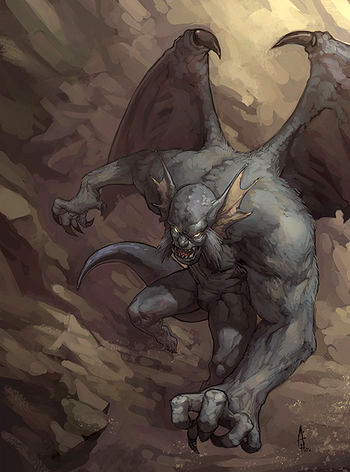 In one of those remarkable coincidences that makes you wonder if the universe does have a plan, it appears that both Kozaar and Adric, through absolutely no fault of their own, are indebted to the same archfiend, a real looker named Fraz Urb’luu. But, as I’ve learned throughout my life, to persuade anyone over to seeing things your way, just find out what they need in life and see if you can at least get them to hope you can give it.

Which is how we ended up looking for a specter. A specter that, upon deeper and more thoughtful reflection, was probably not a thing to promise an archfiend precisely because he wishes to have it so badly.

Still, my first loyalty is to my crewmates, and by the gods, if Fraz wants a specter that he can rule fiend-kind with in order to spare my buddies eternal damnation, he will have that specter. Just get him out of our hair and let the fiends sort their business out for themselves, I say! (I may not have been paying complete attention to what he wants it for.)

The one thing I want to keep an eye on is that Orion fellow. First: What a tool. Second of all, I would bet one of my non-magical instruments that he also made a pact with a fiend and is jealous that Adric has a more powerful and hairier fiend he owes his eternal soul to. I will try to find out more.

The Staffing Challenges of Candlekeep A fascinating mix of enlightenment and barbarism!

Just the Facts, Episode 11: Demons and Libraries Fraz-Urb'luu calls in his debts